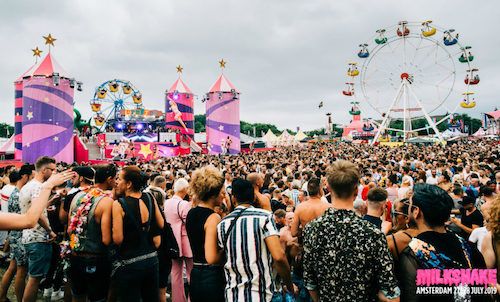 FOR ALL WHO LOVE

Milkshake Festival is an annual summer event at the Westerpark in Amsterdam. Milkshake’s message is very clear: whether you’re tall, thin, gay, straight, yellow or purple; everyone is being welcomed and embraced as how they are. The festival has been created with the idea to create a safe haven for all kinds of people to be who they want to be, even if it’s just for a day or two.

Since 2016 the festival has gone from a one-day festival to a two-day event, doubling the fun and love. From top-name DJs to drag acts and performance art, a place where you can be whoever you want to be. That’s why it’s no surprise that the festival has been a very popular festival for the LGBTQ+ community and liked by many more. After all Milkshake festival is for all who love.

From the very beginning, we have contributed to help grow Milkshake Festival from a small niche festival to one of the biggest open-minded summer events of its kind. The festival has also been overseas with a successful edition in Sao Paulo, Brasil.

We have realized the growth by choosing a multi-channel strategy by translating offline and organic social marketing efforts to online. We have successfully increased ticket sales year by year, by targeting the right messages to the right audiences at the right time. Milkshake’s edition of 2020 was fully sold out in record time in just a few weeks.

Despite the massive growth, the main objective was and always will be to educate everyone what Milkshake Festival stands for: for all who love. This powerful message has been the key for all online ads we have served. With this we have been able to create durable and lasting growth, by combining this powerful message and our strategic online marketing knowledge.

An integrated marketing mix with a focus on social.

Resulting in a very special festival for all who love.

We have worked closely together with Milkshake festival to steadily grow the audience in a durable way. Each year we break record sales, by selecting the right channels, targeting the right audiences, and testing with various ad types to show the best results. With several editions in Amsterdam and also Sao Paulo, we are looking positively to the future to work on many more great campaigns to spread more love.