0
was successfully added to your cart.

Trends in consumer behavior during the Covid-19 crisis (updated weekly) 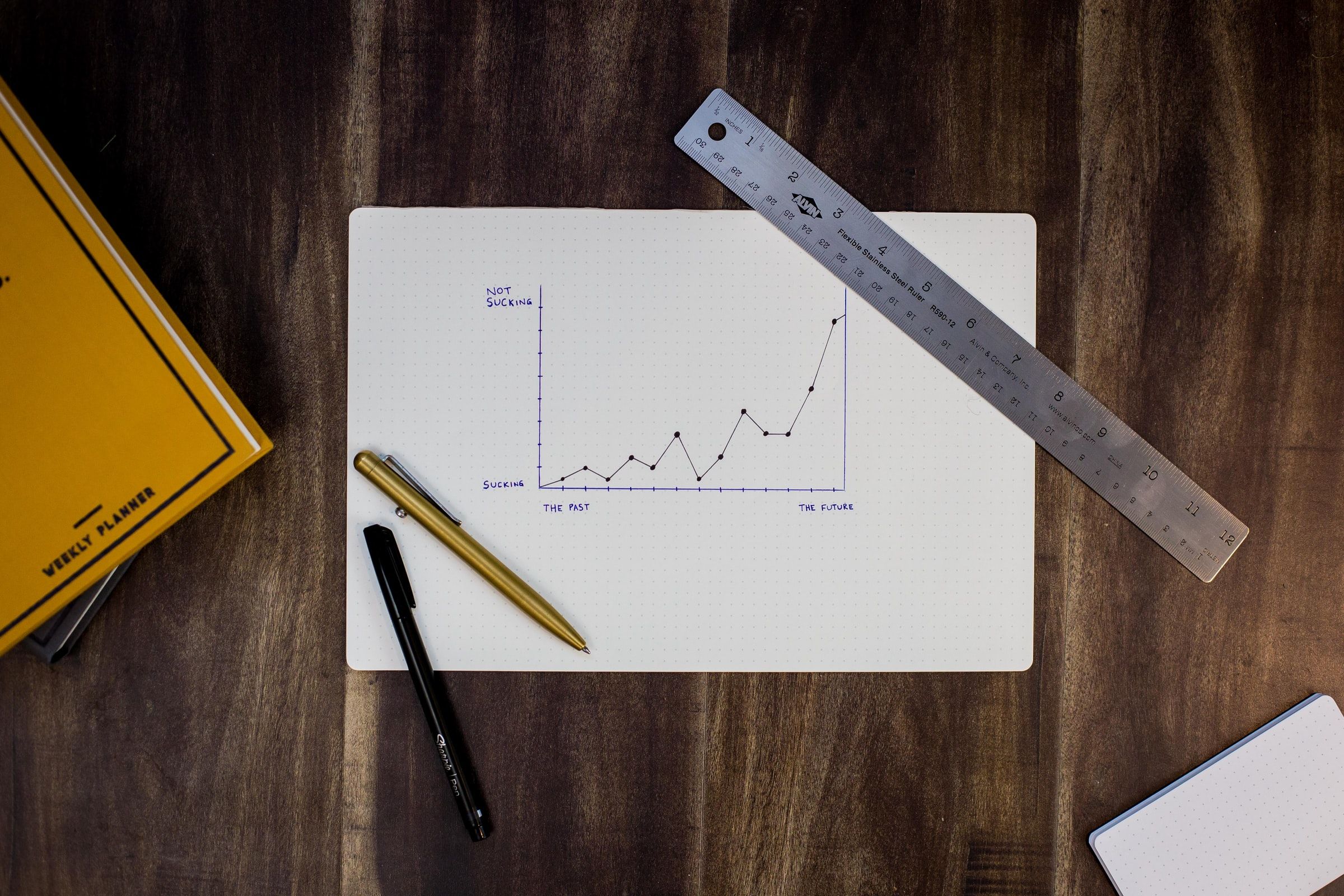 It has already been several weeks since the Covid-19 virus turned everyone’s lives upside down. In the meantime, we have been able to get used to the new situation reasonably well: we implement the 1.5-meter distance rule almost automatically, we only go out the door if we have to, and by now you have bonded deeply with your colleague’s cat via Google Hangouts or Zoom meetings.

Now that we are ‘underway’ for a while, it is interesting to see what’s up with the consumer behavior. Because, the first panic seems to have perished somewhat, and slowly we are adapting to the “new normal”. What does this do to people’s consumption patterns? And how do people view brands and online advertisers?

Positieve initiatives can count on support

In the Netherlands people are looking for a way to contribute to the crisis. The interest in- and need for positive initiatives is also increasing steadily. This is evident from the ‘monitor consumentengedrag’ from market research firm Validators. All in all, good news for all the wonderful initiatives that are springing up like mushrooms.

All over the world, financial markets are highly polarized in terms of consumer spending and optimism about the current crisis. For example, In Japan, people are less optimistic, but they keep more or less the same spending pattern. Whereas in the United States we see a fairly optimistic population, but they are reducing their spending much more (up to about 30%).

So, many spend less and save money, but there’s also a large group who do not do so. That may sound strange, but this is exactly the polarization we see at the moment. To illustrate, the polarization is clearly shown in the following graph that compares the Covid-19 crisis with the financial crisis of 2009.

How are consumers spending their money now?

A number of industries are currently less affected by the crisis and are even thriving. The ‘monitor consumentengedrag’ from Validators shows that if people in the Netherlands are spending their money, it’s mainly on online shopping, provisions and home & garden tools, with mainly online shopping showing a constant increase over the last 3 weeks in the age category 18- 54.

The financially impacted lean-in the most

This requires some explanation. Those most affected by the Covid-19 crisis want to see brands educate, entertain & engage. You could say that the tolerance for brand communication is higher in the ‘financially impacted group’ than those who are less affected by the crisis.

For example, the first group watches more movies, funny videos and tutorials online, but they are also looking more for financial advice, things to do at home and information on how to stay healthy and active. In just about every category in media needs and tolerances, those who are worse off financially due to the crisis score higher.

This may be explained by the fact that people are currently looking for distraction and are therefore looking for activities or advice that will allow them to climb out of their disadvantaged position. We see more and more examples of brands that respond to this by creating challenges, offering tutorials and content for free that mainly helps people stay active and entertained at home. Content that delivers value.

We have landed in a period of forced experimentation. Suddenly we have meetings online, we try out new (or lost) hobbies and we are video calling with our grandmothers and grandfathers. Interestingly, this period provides progress and leads to new discoveries in some areas; whether these are technological or more focused on spiritual experimentation. For example, a consumer behavior monitor survey from Facebook in Germany shows that 23% of respondents used a meditation app for the first time. Moreover, they utilize as much as 72% more online media streaming services.

The fact that people are shifting more to online is also evident when looking at the numbers. These show that the lion’s share (DE 87% & UK 68%) of the respondents’ shop online more, or the same as before. As a result, it cannot be said often enough that the translation to online must be made nów if it had not yet been made. The reason for this is also that much of the behavior that is now being displayed in terms of online shopping will partly last. People now experience the convenience and the question is now who ends up at the top of the search results or who is prominently present on social media with the right messaging.

As previously stated, we have all been at home for a while now. Boredom is starting to kick in and people are looking for all kinds of ways to spend the time at home. To illustrate, the demand for online streaming services such as Netflix is ​​still on the rise. In addition, the number of people who turn to online gaming for entertainment also sees an unprecedented increase. Lastly, offline entertainment such as puzzles and board games are also rising in popularity.

Besides, many people want to use this period to learn a new skill. Bread making is very popular in Germany and the UK, and meditation and mindfulness apps are also doing very well. Music streaming services are also seeing a change in the music taste of many people: people are increasingly listening to relaxed, lounge music. So people really try to relax while stuck at home.

Most records, however, are set with fitness apps. It is very important to stay or get fit and everyone in the world has started exercising at home. In particular, we see a rise in demand for and supply of online sports lessons on YouTube and social media. In the same way that home-sports challenges pop up everywhere.

In both the Netherlands, Germany and the UK, the biggest disruption in the consumption pattern is due to delayed large purchases. The purchase of, among other things, air travel, holidays, festival tickets and cars are currently postponed as much as possible by the consumer. These deferred purchases are expected to catch up when the virus outbreak is over. So there is little cancellation: the plans are only shifted to a long-term schedule. 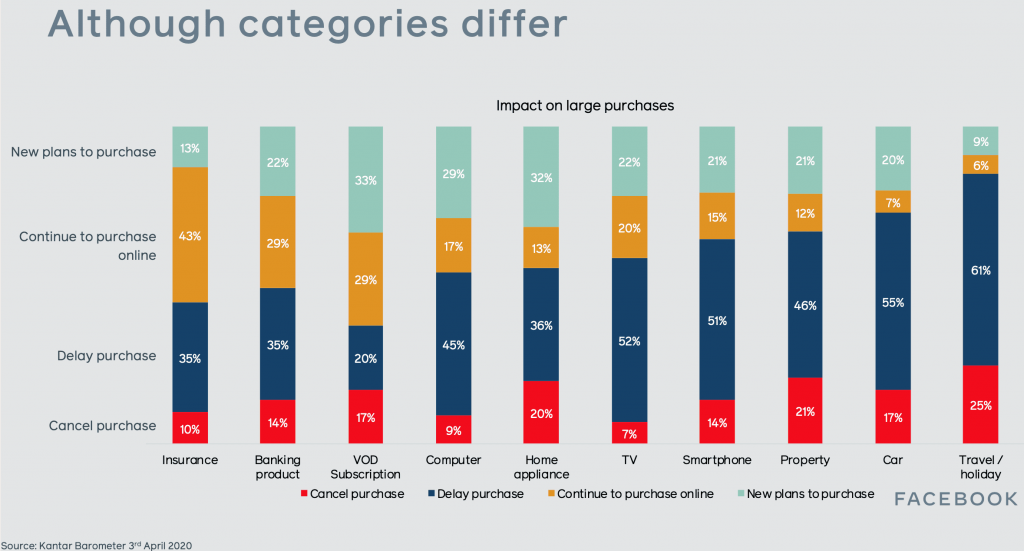 Research in Germany and the UK indicates that it is believed that it will be a long time before the outbreak is under control. However, people dare to daydream again and make plans for the (distant) future, because people dó believe that the situation will get better eventually.

Next phase of the crisis

Because we are getting used to the situation we are all in, we are entering a new phase of the crisis. News consumption is reaching a plateau, we are slowly getting “Corona tired”. We are also seeing (again in DE and UK) that the fear of catching the virus is slowly subsiding. People do not want to be anxious for too long, but prefer to pick up life again, whilst taking into account the current situation.

This is good news for brands and companies. Where a large group of respondents (from DE and UK) reacted negatively in the week of March 16 to the question whether they thought companies could continue advertising ‘as normal’, that group is already a lot smaller a few weeks later. (in DE from 62% of respondents to 18%). Consumers have an open mindset when it comes to hearing from companies again. In the UK, it appears that even a quarter of consumers are trying new products and brands. 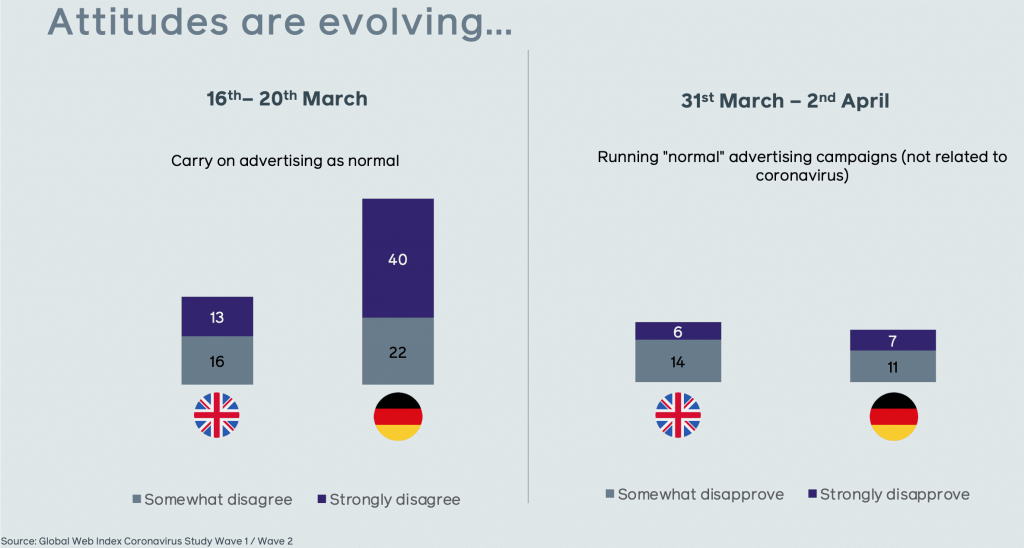 Delivering the ‘right’ message is crucial

That the consumer is not necessarily against online advertising of brands is good news in itself. If you are ready for this as an organization, it is of the utmost importance to think very carefully about the message you want to communicate. How brands respond to the crisis can make or break a company forever: 2/3 of respondents in the UK say that putting profit above people will cause permanent damage to a brand. So stay alert with creating your message and think carefully whether a message is suitable for the moment.

This blog will be updated regularly during this period. Do you want to be kept informed of news in the online advertising world? Follow us on LinkedIn and Facebook. Want to start advertising or get advice on any of our provided services? Get in touch here. 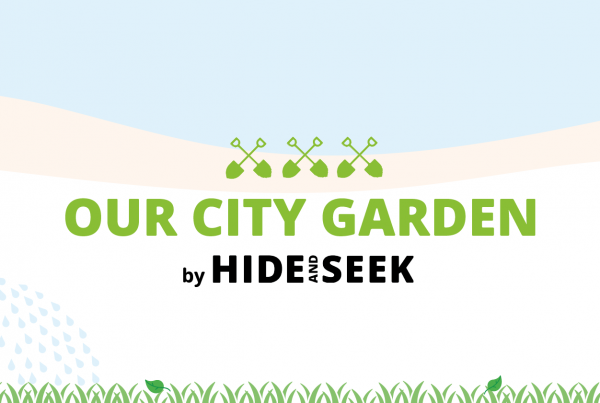 Our City Garden, the platform that connects Amsterdam entrepreneurs and residents 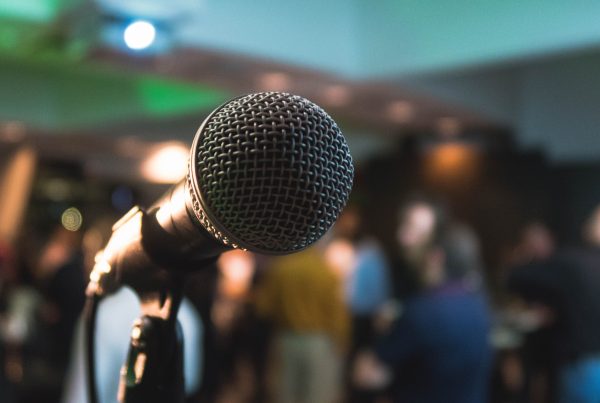 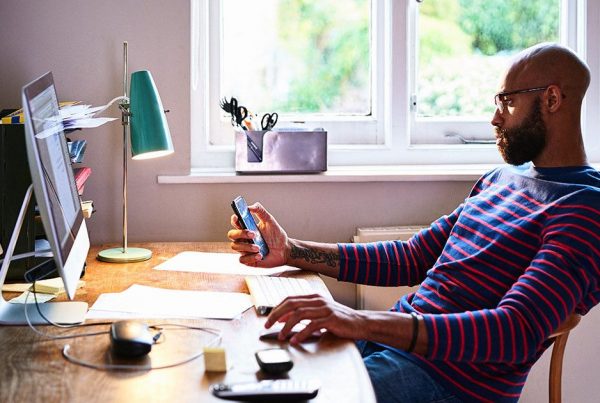 The impact of COVID-19 on your online marketing